Microsoft Surface: This was my computer...8 year ago

When Microsoft introduced their Surface tablets a few weeks ago, I had a deja-vu moment. Hadn't I already seen this computer? Hadn't I used it as my primary computer for nearly two years around 2004/2005?

What I was remembering was my trusty Motion Computing tablet running Windows XP Tablet Edition. Granted, the Motion tablet was nowhere near as slick as what the Surface looks to be, but it honestly doesn't seem like Microsoft has evolved too much in the meantime, either. 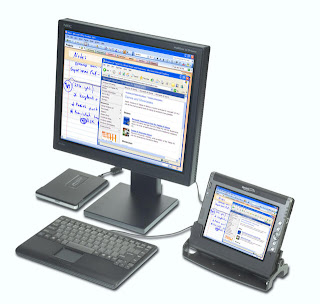 I used my Motion tablet as my primary computer. Because it ran full Windows XP, I could run any applications that I needed to. I could grab the tablet and take it to meetings and take notes using One Note (which had excellent handwriting recognition, by the way). When I got back to my desk, I would drop the tablet into it's docking station and it would instantly connect to an external monitor, keyboard, mouse, etc. Although the image to the left isn't my personal setup, it did look something like that.

Although I am now a truly converted Mac guy, this setup was really very good. No hassles syncing devices. No reduced set of applications on the tablet. No missing files. I always had my full computer with me and it could be easily converted from tablet, to desktop, to laptop (with a keyboard case not un-like the Logitech Keyboard Case for iPad).

So, while the Surface looks like a pretty cool device, it doesn't feel like Microsoft has innovated very much in the past 8+ years. We're still looking at a laptop replacement that runs a complete version of Windows (with the Pro version of Surface). Granted, Windows 8 is very different than XP, but has Microsoft actually evolved all that much?

But, regardless of whether Microsoft has evolved or not evolved, the concept of a "complete" OS on a tablet is a good one. For those in the enterprise, all your applications will still work, and you'll be able to work on them in some form from both a tablet interface or from a "normal" laptop-style interface. The situation I described above was a great working environment. And, while I do work mostly in the cloud these days, I would love to be able to dock my iPad to a large monitor and keyboard/mouse and have a solid desktop computing environment that could easily convert to tablet format at a moment's notice.

Some are raising the question of whether Microsoft will have an "app" ecosystem to rival the Apple app store. I believe this is almost a non issue in the short term. There is tons of Windows software still out there and there is plenty of custom software in the enterprise that will ONLY run on Windows computers or in Internet Explorer. Hard to believe, but true.

Most Windows developers will only have to do a little work to make their software work for Windows 8. Many won't have to do any work at all. Microsoft has an app ecosystem that they've been developing for over 2 decades and it's not quite dead...yet.

And, by the way, isn't it ironic that we are now talking about the availability of software for a Microsoft product? That the major problem with choosing a Mac for over a decade... not enough software. Now, it looks like the shoe is on the other foot. Funny how the world changes.

I'm looking forward to see how the Surface does in the market. I think it has a decent chance at stealing market share from traditional Windows laptop makers. Will it steal from the iPad? I don't think so. Surface will succeed in the enterprise, though.
Posted by Unknown at 3:41 PM